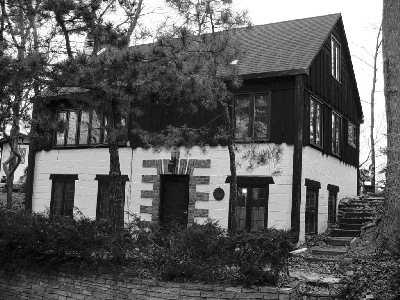 Seventeen Ski Hill is a house with many names. Originally built in 1933, it was the “Booth” house until the early 1950s. It became the “Hanson” house for a few years until the Hanson family sold it in 1955 to Jack and Barbara Ahrens and her mom, Katherine Parker. Then it became known as the “Ahrens” house. In 1999 along came Curt Winkle and Ken Martin who took the reins from Barbara and have made it their home. Through all those changes of ownership, there is one name that has stuck. It adorns the sturdy handcrafted front door. In the middle of a tiny window in the door, framed by rope is a hand-cut metal screen with a silhouette of a small ships wheel, a guiding star and the word “Anchorage”. According to Barbara Ahrens who visited her old house in 2002, “that ship’s wheel and name have been on the front door ever since the house was built. It’s always been the “Anchorage”, even when we lived here. “People used to think my name was “Anchorage”. Following that logic she might also have been known as “Fireman” since “there’s also a fireman plaque on the front of the house.” 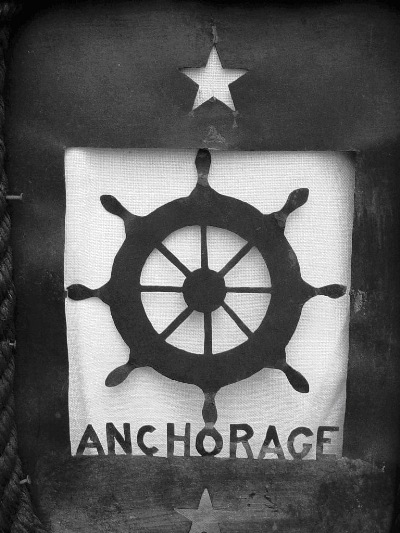 The Ahrens era Other neighbors might disagree about the house’s nickname. They knew Jack and Barbara Ahrens as a fun couple whose reputation for New Year’s parties grew legendary. A big tradition was to throw the celebratory drinking glasses into the great fireplace under the big clock each New Year’s Eve. “Mom finally wised up”, Jack Ahrens, II said. “She started charging people for the broken glasses”. Barbara added, “I made them pay before they threw [the glasses] in the fireplace so there wasn’t any trouble!” The Ahrens suspect somewhere at the bottom of the fireplace’s ash-box is a lot of broken glasses. “It probably looks like Al Capone’s vault. Who knows how many decades it will take to fill up that enormous old fireplace ash pit?” Barbara’s mom, Katherine Parker, a school teacher who taught art, lived in the adjacent structure, 17-1/2 Ski Hill Road, originally a part of 17 Ski Hill that featured an art studio above a two automobile garage. Like many Duners, Katherine was an artist. She moved to Ogden Dunes after she retired from Hirsch High Shool. “Mom was not a good driver”, Barbara Ahrens said. “When mother opened her garage door, everyone else in town closed theirs. She never should have learned to drive.” Barbara and Jack raised their two children, Jan and Jack Junior in the house. Barbara described her husband, Jack senior as a a WWII veteran – “Marine to the core.” “Jack taught all of us to shoot with pistols and rifles,” Barbara said, adding, “We used to practice in the basement furnace room. We had a target range down there. I remember [my daughter] Jan practicing hitting the bulls eye in the basement one day and my husband yelled, ‘no, Jan, shoot straight ahead at the target, not up!” “I was in the bathroom and nearly keeled over from fright”. Barbara’s son Jack added, “from then on we shot more often outdoors in the sand dunes where it was safer!” Ski Hill development The original owners, Robert and Agnes L. Booth, commissioned the Anchorage house in 1933 and bought it on Oct 1, 1934. Barbara Ahrens noted, “Booth was an engineer who lived on South Shore Drive in Chicago. He had Pete Nicholson build this house. I think Pete was commissioned by the owner or artist next door” and that’s why “so many of the houses [on Ski Hill Road] are so very similar.” It was built on the site of the old ski jump, well known among “duners” as the Ogden Dunes Ski Club and Hill. After the Ski Jump Corporation went bankrupt, the land was sold and a string of charming small cottages was built. Legend has it (and we love perpetuating legends) that the builder of 17 Ski Hill Road “stole” the plans from the original developer of what is now 11 Ski Hill Road, but there is more to that story and perhaps over time we may learn some of the true facts. The first house to be built on the Ski Hill was the house at 11 Ski Hill Road, now owned by Jerry Dunn and John Watson. Originally built in 1930 and designed by the famed Ravinia Music Festival architect Harry Howe Bentley, the house at 11 Ski Hill Road was designed as a rustic cottage with simple French provincial details. It originally faced the great ski jump on Ski Hill and its “driveway” was a simple dirt road that leads along the top ledge of the Ski Hill and later became the foundations of 15 and 17 Ski Hill Road. Number 15 Ski Hill Road, now owned by Robert and Ruth Ann Pastrick and originally called the Lutz Home, followed in 1932 and was built by the general contractor Henry Crull, Jr. of Roseland, Chicago. That house is currently undergoing a dramatic addition and features similar architectural details such as arched window wells. 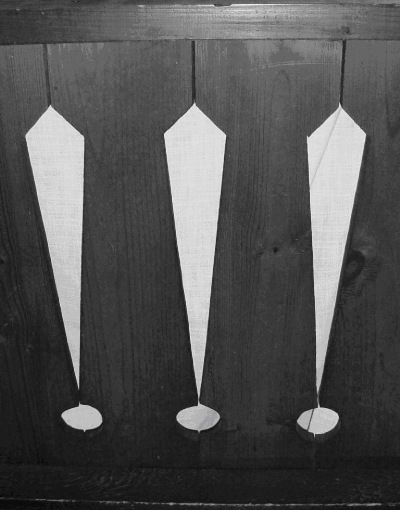 If the builder of 17 Ski Hill did adapt the plans from the other houses, the look was slightly different from the rest. Featuring a dark vaulted ceiling and knotty pine walls throughout the upper level, the Anchorage, despite its name, has a decidedly ski chalet feeling with unusual details such as exaggerated exclamation marks in the stair balustrades and the large, tall clock over the stone fireplace. 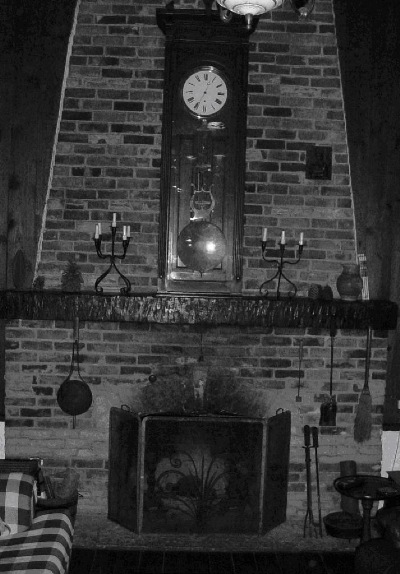 “I’m told there are just a few other clocks like that one”, Barbara Ahrens said as she gazed again the six foot tall Eastlake style clock that has hung over the fireplace mantel in the living room of 17 Ski Hill for over seventy years. “It came from an real estate office on 77th Street in Chicago. There is a nearly identical clock at the Tucson Museum in Arizona that came out of the First State Bank of Tucson office.” It’s quite rare and, Barbara added, “I think it really belongs with the house, don’t you?” “Yes,” Ken Mar

tin nodded. “It’s like the anchor on the front door. It’s part of the house.” With busy lives in Chicago, Ken and Curt agree that their house is indeed their anchorage, even if the beach is a two-dune walk away. Sources: Many thanks to Barbara Ahrens, Jack and Sandee Ahrens who provided a verbal history of the “Anchorage” and Courtney Van Lopik for a neighbor’s insight. Thanks also to Bob and Ru

th Ann Pastrick and especially John Watson and Jerry Dunn for the wonderful history of the surrounding houses on Ski Hill Road as documented in “The Architectural Record (Nov, 1930) and the pamphlet from the “Spring Open House Tour” of May 2, 1993.

100 things to do in Gary and NW Indiana