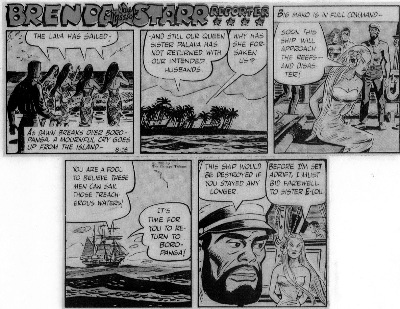 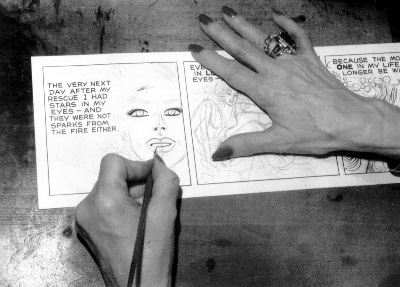 On Sunday, May 27, 2007, the Historical Society of Ogden Dunes provided a special oral and video presentation about acclaimed cartoonist Dale Messick, creator of the “Brenda Starr, Reporter” comic series.

Joan Meister began the program with a brief overview of Messick’s life. A video excerpt from the documentary “Funny Ladies: A Portrait of Women Cartoonists” followed, and Joan’s program ended with a personal reflection on Messick’s legacy by her daughter Starr Rohrman. Dale’s original cartoon artwork was displayed at the presentation.

Dale Messick was a groundbreaking female cartoonist. Borne in South Bend in
1906, Dale grew up in Hobart, Indiana, and worked in New York and Chicago.
On June 30, 1940, the Chicago Tribune-New York News began to syndicate her
cartoon, “Brenda Starr, Reporter” “Brenda Starr” is still going strong at
67, though Dale Messick retired in the early 1980s and died at 99 in April
2005.  Mary Schmich, reporter for the Tribune, now is the writer and June
Bridgman, the cartoonist.

From 1952 until the late 1960s, Dale Messick, her husband, Gary attorney
Oscar Strom, and her daughter Starr lived first on Shore Drive and then Sky
Line Drive in Ogden Dunes.   Messick later lived in Chicago and California.
In 1991, Dale Messick was one of the four women cartoonists featured in the
documentary, “Funny Ladies: A Portrait of Women Cartoonists.”  In the 1990s,
she developed a new comic character, “Granny Glamour” that appeared in
publications for retirees.

Here Dale is seen drafting one of her illustrations.