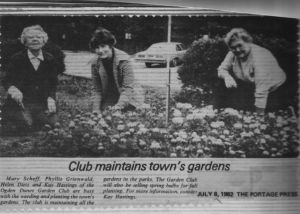 On October 16, 1974 a group of women in Ogden Dunes organized the Garden Club of Ogden Dunes with 28 charter members.   It received its charter or federation status with the Garden Club of Indiana and the National Council of State Garden Clubs  on January 28, 1975.   Its purpose is to promote interest and knowledge in gardening and conservation and to further home and civic beautification.

The members, who were limited to 30, paid annual dues, made a purchase at a fund raiser, and volunteered on committees, as well as hosting or co-hosting monthly meetings and programs.   The Club met monthly with a short business meeting and then a program.   During the first ten plus years most meetings were held at a member’s home, with another member serving as co-host.   By the early 1990s, the Club held most of their monthly meetings at the Community Church.

The club also scheduled optional field trips during the year.   Very early in its history the Club took on civic beautification, especially in planning, planting and maintaining the town gardens at the entrance, at the Town Triangle, i. e. the location of the Marshal’s Office and now the Town Hall, and around the Town Bulletin Board in front of the Fire Station.

In the beginning the major raiser was making and selling garden-related arts and crafts an annual bazaar that was held in late November.   Beginning in 1998 the Garden Club sponsored an annual garden walk and plant sale as its major fund raiser.

Although the Garden Club is now inactive.  Many of its former members, as well as other residents, still maintain the Town Gardens and are involved in the Town’s Beautification Committee, the Home Association and Park Board.